skip to main | skip to sidebar

When it comes to corsets, everyone has a specific image in mind. Which is why a pattern company such as Laughing Moon, or Truly Victorian can create a single corset pattern and have it work for pretty much any time period from the civil war to the edwardian.
Don't get me wrong, the LM and TV corsets are wonderful patterns, and I'd highly recommend them. Especially if you're just looking for something to go with your outfit and have it simple to sew. I'm planning on trying the TV110 once I finish my LM 100 myself.
But if you're like me, and you'd enjoy learning more about the various styles, and perhaps corsets suited to specific fitting issues, I thought this might be an interesting eye candy piece for study.
Early 20th century brassiere worn with the under the bust edwardian styles. You didn't think they just let their girls hang did you? ;)
Here are a few vintage images from La Mode Illustree family magazine, which was a very popular high fashion magazine in France from as far back as the late 1850's. Sadly extremely few originals are still in existence that far back, but the 1860's to the turn of the century are still around. Mostly in various collections. 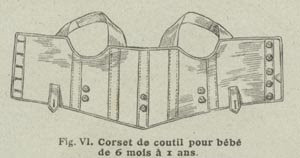 This was an infants corset from 1918, age 6 months to a year. You'll notice there's a lack of boning, and wider seams. It resembles a type of vest more than a corset, with buttons instead of laces.
This one appears to have buttonhole tabs on it near the waist. I don't have this pattern personally, so my guess is it's used for holding either the nappy or wool soaker in place. 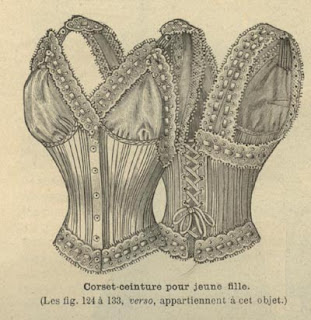 An 1899 young ladies corset. Lightly boned, it begins her preparation for wearing a fully cinched corset, while giving her the freedom of comfort. No different than training bra's today.
Around this time, the longer corsets were beginning to come into fashion, which also may be why it's an under the bust style. Small brassieres were worn with those as mentioned above.
Instead of a busk it's buttoned up the front with lace and ribbon trim. 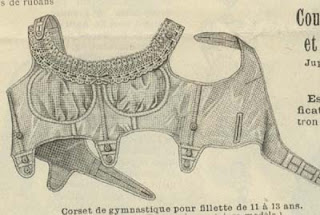 A nice example from 1906, for a girl between 11 and 13 for sports and gymnastics. I found this pattern interesting due to it's unusual style. It has buttons on the outside, probably used for holding up her underskirts.
Other examples of this can be seen on adult corsets. Hooks sewn in upside down to hook onto the corset cover, thus holding it down in place. And hooks facing down to hold up a petticoat, which might slip around. Madam Foy's skirt supporting corsets from the 1860's come to mind. 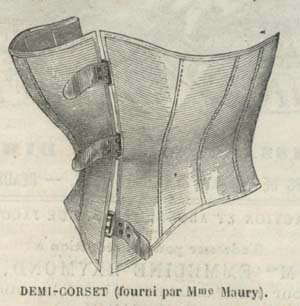 Madam Maury's demi corset from 1972. These were sewn into the front half of a bodice, for support when a full corset wasn't wanted.
I find it interesting it has small belt like buckles in the front for adjusting the size, instead of a busk. 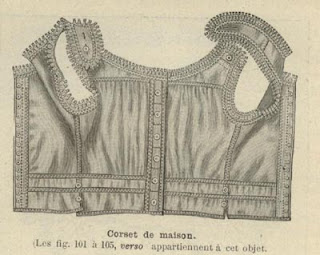 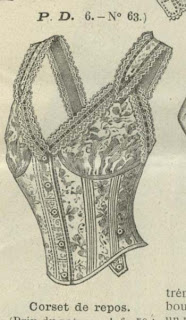 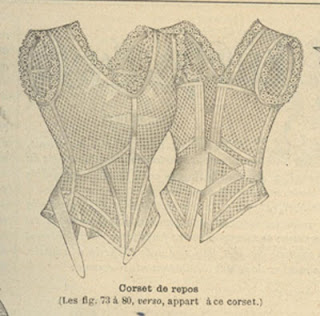 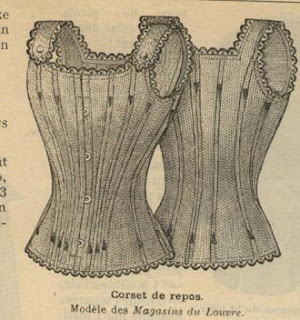 Two more corsets from 1901 and 1892. The 1901 has small squares drawn over it, which reminds me of the cotton windowpane fabric often used for bonnets back in the 1830's. If so, it would make a great fabric that's both comfy and cool in the summer heat.
As a modern reference, women today often wear leasure brassieres, or light control sports bras when they're at home and relaxing, or while sleeping if they're rather bosomy. Victorian women don't seem so different after all :) 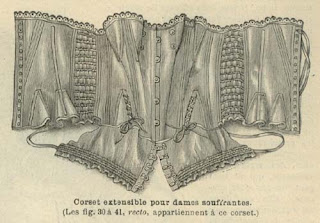 From 1901, an extending corset for suffering ladies. Which could cover a multitude of issues, from medically related issues to her monthly, which for some can cause severe stomach and back pain.
It could also cover that tummy problem many women have, which contrary to popular belief, was a problem as far back as the tudor period. We just don't see images of women with real figures because the slim willowy look was popular at this time.
It's no different today. Unless modeling for a company that specifically deals in larger sizes, most models seen in magazines and advertisements, are the thinner, starving waif types, which doesn't reflect the average woman realistically. 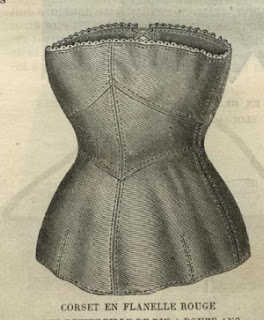 Here we have an 1868 red wool flannel corset. Notice the lack of boning. These were worn under their dress, but over the corset to add warmth in the winter months. Some women preferred to knit them, but sewn examples do exist, along with their counterpart the wool, and or quilted petticoat. 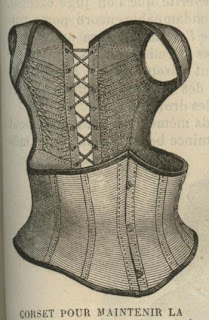 An 1870's posture corset, worn by young ladies mostly. It may have been worn over their dress, as evidenced by the following photos. Because the first has the girl sketched in her chemise, I have no doubt that some styles of this corset were worn under the clothes, while others were worn over the dress, and drawing it in full attire wasn't merely a point of modesty. These images are a year apart, the first from 1870, the second and third, 1872. 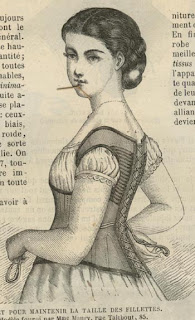 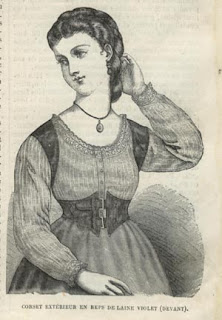 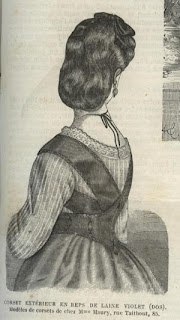 I own a clear copy of the demi corset pattern, and the 1872 posture corsets from the July 21st issue. There's another version in there as well I didn't bother scanning.
The suggested colours for the exterier corsets, were red and violet, with the red version having cording sewn across the upper back, similar to the 1870 version, for added support. However the violet also has a pair of belt cinches, so it may have served as a waist training corset as well. The magazine doesn't detail it's specific purpose, only how to sew it along with the patterns.

This is from a 1913 pattern, for the long Edwardian style corset. Notice the early example of a brassiere used to maintain support, while the corset was used to give the long smooth figure popular from early 1900's to the 1920's. Aka the titanic period to some.
It was and is difficult to sit down in, as well as walking is slow. Unless you enjoy tripping.
This one is equipped with stocking garters, worn with knee high stockings, and was usually made up in white coutil. Closer to the girdle which slowly developed from the 1920's and onward. 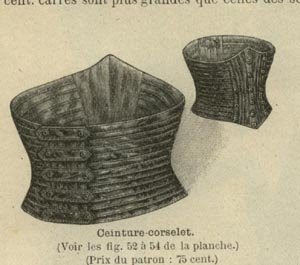 This is a 1907 swiss waist style, under the bust corselet. This pattern is unique in that it's the only one I've seen so far, that is quilted. Because it's done up in a decorative fabric, the purpose of this style was to be worn over the dress as a fashion piece, and did not replace the corset itself. 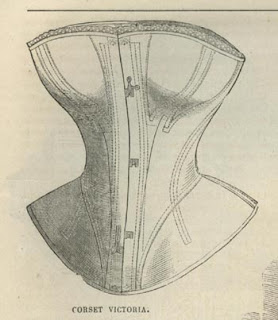 Lastly of the images I intended to share from my own studies, is the Victoria corset. The pattern for this corset is from an 1862 issue, and may be a style worn by the queen. It's a well known fact the queen influenced fashion all through her reign.
Unlike most corsets with gores, this one has the full hip pieces, very similar to Madam Sebille's 1863 patent. In 1904 Emile Savoye invented a similar corset, also with full hip pieces. In her patent she describes it as "conformable to each body whatever may be the form and size of the persons." and "obtaining an agreeable appearance."

If you enjoy looking at vintage corsets themselves, you really must see the image links collected at Demode, and Lara's corset museum, from Lara Corsets. I wasn't able to find a good vintage pattern for the nursing corset yet, but she has one on display. Which is a great help to anyone trying to figure out how to convert a corset for this purpose.
And very last of the links I'll share for now, one of the most extensive corset lists I've come across, for further research and study. The Great Corsetry Links.
Posted by Yasmaen at 7:41 AM

This is awesome... I wish I could try out some of these

I realize this is an old post, but just to let you know; "souffrante" is an old French euphemism for "pregnant". The 1901 image is a maternity corset (which sounds like an awfully uncomfortable idea!), hence the adjustable belly section and extra length in front. If you look closely, it seems to also have buttoned flaps on the bust section, for use as a nursing corset after birth. Hard to believe the magazine wanted women to make up such a complicated pattern at home; I wonder how many were successful!

Yasmaen
I'm first and foremost an artist of a sort, and I'm a writer who aspires to be an author. I sew/embroider/tat/crochet/knit/cook/love books/dabble in language/ and I dream a lot. Some say too much, but where would art be without the muses of dreams? And I'm sure my list will grow in time.